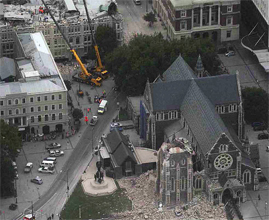 Scottish singers are coming together for a major benefit concert on Monday 28th February 2011 at 8pm for the people of Christchurch, New Zealand.

The concert will take place in St Mary's Episcopal Cathedral, 300 Great Western Road, Glasgow, which is an almost exact twin of the cathedral which has been damaged in Christchurch. The two buildings were built at the same time to a design by the same architect, Sir George Gilbert Scott.

As well as Requiem by Maurice Duruflé the concert will also feature the music of several New Zealanders living in Scotland.

Cathedral Provost The Very Rev Kelvin Holdsworth said: “People in Scotland have all kinds of strong links with people in New Zealand. This concert is an act of solidarity with the people of Christchurch. Christchurch Cathedral is like a 'twin' of St Mary's Episcopal Cathedral in Glasgow, having been built by the same architect at almost exactly the same time. As we look around the building in Glasgow, our hearts go out to those who are struggling to cope in a damaged city half a world away.”

Organiser Michael Bawtree added: “Scotland has very strong links with New Zealand. Many of us who will perform have friends and family living and working in Christchurch; many have visited, lived, performed and worked in New Zealand; others are simply keen to show that support by giving of their time and talent.”

Stephen Chambers, an RSAMD Opera student from New Zealand who will perform at the concert, said: "My Dad (Dr. John Chambers) was in Christchurch on a Medical conference when the Earthquake hit. He managed to escape unscathed from the fourteenth floor of his hotel, which looked as though it was about to collapse. Like so many Kiwis around the world, I feel helpless. I hope that in putting on this concert we can get some money together to aid those hardest hit in the beautiful country that I call home."

Funds raised at this benefit concert will be passed through official channels to those most in need.

For those who are into such things there is an associated Facebook Event but the important thing is to come along to the concert and donate whatever you can afford.

Please consider supporting this worthy cause, and if you can't make it along to the concert you can give online to the Red Cross New Zealand Earthquake appeal by following this link.
Posted by Layclerk at 17:47

The New 4tet is a group of four friends, Gemma, Emma, Gary and Noel, who as very experienced choral singers decided to meet once in a while to drink wine, chat, socialise, and do a bit of singing together, just for fun.

As these things do however, the project has started to grow arms and legs, and we are now available for the occasional bit of singing in public when we feel like it.

Based in the west of Scotland, we all sing together in a prominent Glasgow choir, but the New 4tet gives us a chance to enjoy the much more intimate sensations of singing one to a part.

All four of us have been involved in the music industry to a greater or lesser degree, but for a variety of reasons only one of us still is and the others do something totally different, but we all sing to a very high standard and love performing.

If you'd like to know some more about the New 4tet, including the possibility of us coming to sing for you, please email us at